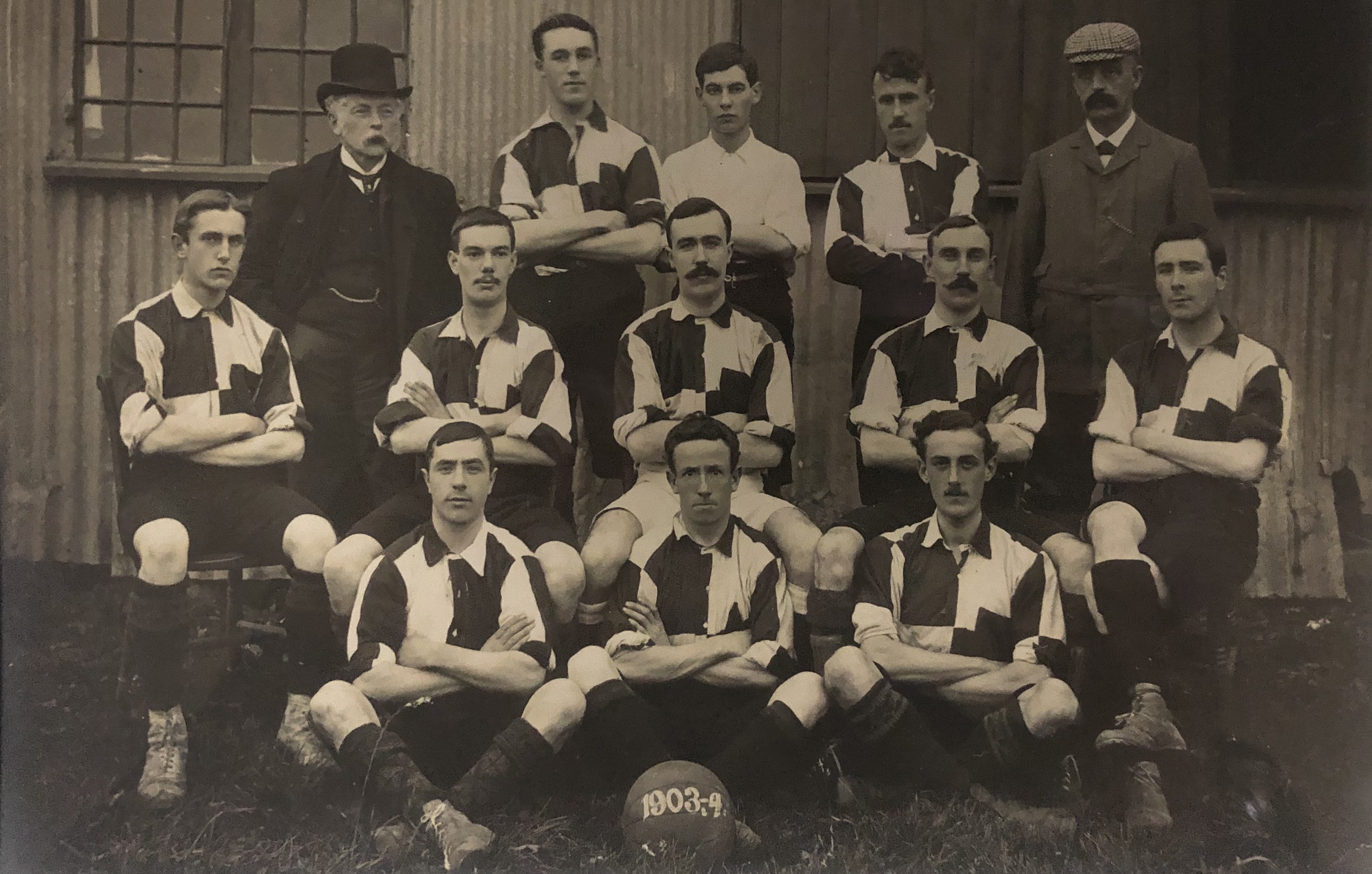 The Founding of The Dorchester Football Club

The history of our club can be traced back originally to 1871 and the founding of The Dorchester Football Club. Like many clubs of that era, the  Football Club played the rules of football that later evolved to become what we know today as rugby, but nevertheless the club quickly "attained an enviable reputation for respectability and skill" according to the Dorset County Chronicle.

By the end of the decade, the craze of Association Rules for the game of football had swept along the south coast, and on Monday 18th October 1880, the town's men gathered in The Kings' Arms Hotel to "resuscitate" The Dorchester Football Club under association rules. They would play their home game at The Recreation Ground on Weymouth Avenue - home to the cricket club in the summer months. Leonard Robinson would be the club's first ever captain, a position he would hold for many years.

The now-traditional Boxing Day Derby fixture first appears in records in 1885, when "a large concourse of supporters" attended as Dorchester lost four-nil to the Dorchester Bonfire Boys. In typical derby fashion, the game was a feisty one, with one DFC player dislocating his shoulder.

Above: The team from 1903, in their then customary black and white quarters. 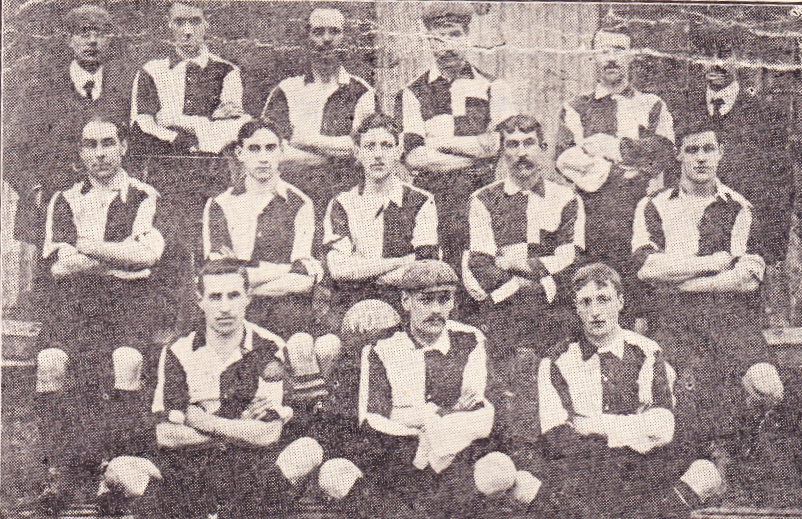 "A team worthy of the good old town of Dorchester."

Such was the importance of the town's economy to the wider region, that whilst most of the country typically took their half-holiday on a Saturday afternoon, the townsfolk of Dorchester took theirs on a Thursday - the day after market day. Whilst the Saturday team of Dorchester Football Club struggled in the Dorset League, the Thursday team excelled.

The Town's unique weekend arrangements meant that many Dorchester clubs struggled to organise matches with opposition on Thursday's or be able to muster a team for Saturday matches outside of town, and in 1908/09 the club imposed a policy of only playing fellow Dorchester teams and visiting military teams. However, this policy only lasted for one season and in the following year an alternative plan was drawn up. As so on 26 August 1910, representatives from Dorchester United (cricket), Rovers (cycling), Athletic and Wanderers attended The Dorchester Football Club AGM and agreed to join them to create "a team worthy of the good old town of Dorchester."

It was here that the club adopted its new name of Dorchester Town Football Club to signify it's new united ambition for the town.

In 1921 the club moved briefly to cherry and white with blue shorts, but returned to the traditional black and white stripes just five years later.

Below: The Dorchester Town FC team of 1912 - now in the iconic stripes. 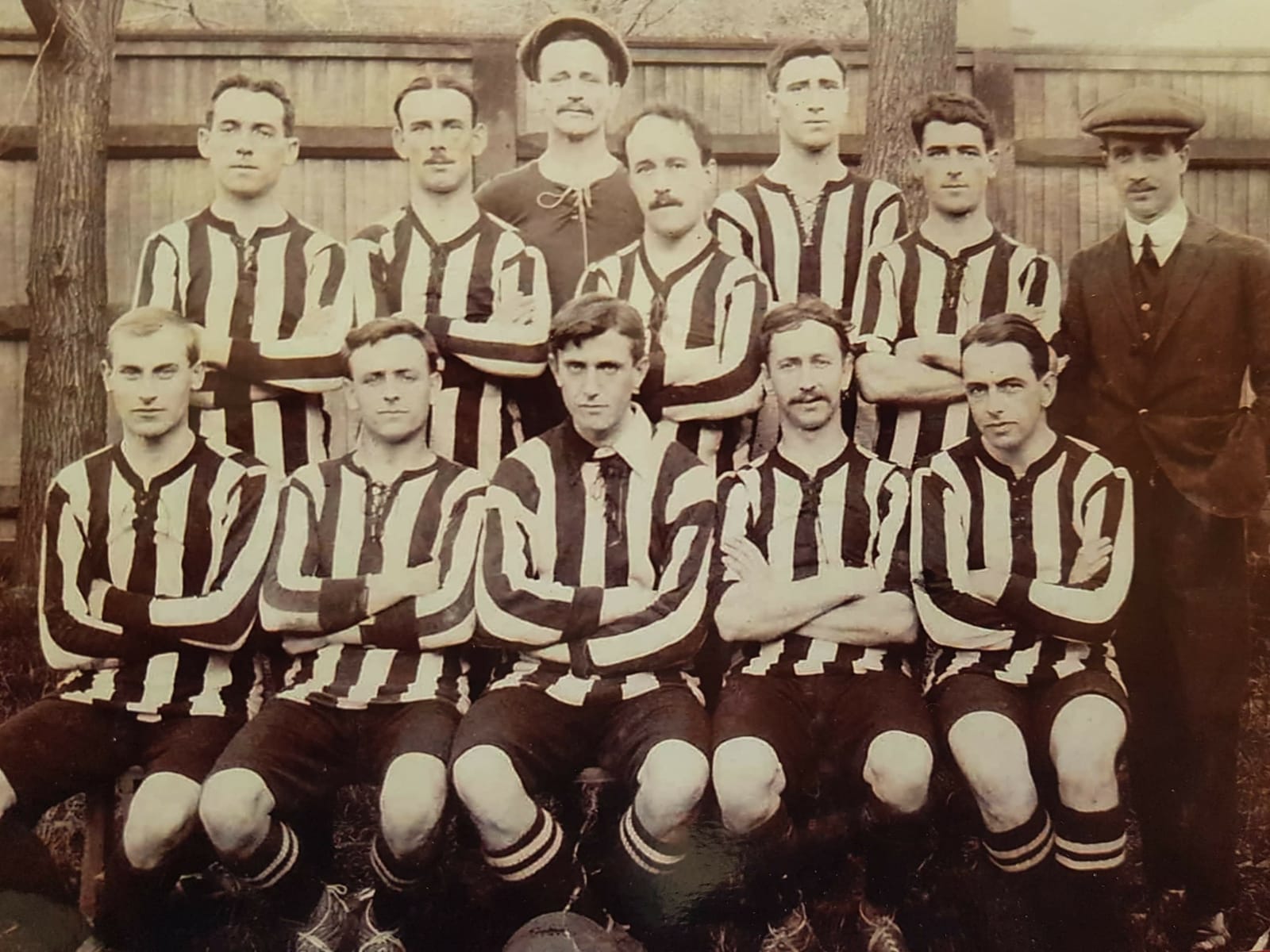 In 1929, the club moved from the Recreation Ground to land adjacent to Webb & Major's Timber Yard ("Sawmills") to the dedicated Avenue Football Ground.

Just five years' later a remarkable event took place at the ground on 30 August 1934. To commemorate the centenary of the Tolpuddle Martyrs, Lloyd George MP - the last of the Liberal Prime Ministers and the man who helped create a Free Ireland - held a rally at a packed Avenue Ground.

In the afternoon, Dorchester Town hosted the London Labour Football Club, followed in the evening by a game against an international workers' XI.

The move to Professional Football

With Post-War Football thriving across the country, the club joined the Western League in 1947 and two years later turned professional with Mr KW Holland declaring "People will not turn up in large numbers to watch Dorset league football." With the club now averaging gates of between 1000-1500, success quickly arrived with the Western League Championship in 1954/55.

Following the arrival of former AFC Bournemouth 'keeper Ken Bird, The club begun to taste regular success in the FA Cup throughout the 50's.

In 1954/55, we reached the first round proper for the first team, following victories over Poole, Bournemouth Gasworks, Portland and Winchester. In the first round we hosted fellow non-leaguers Bedford Town in front of a gate of 3,500. A 2-0 win saw us rewarded with the plumb tie of York City at home. A record crowd of 5,750 packed out the Avenue, but despite taking the lead, we'd fall short, losing 5-2. York would go on to make the semi-finals that year.

The following year (1955/56) we once again made the first round proper. Having put aside Newport IoW in the final qualifying round, where we were drawn away to Norwich City. A packed Carrow Road saw the Magpies fall to a 4-0 defeat.

We again reached the First Round proper in 1956/57. Having been taken to a replay by Bideford, our reward was a trip to Loftus Road to face Queen's Park Rangers where we once again fell to a 4-0 defeat.

For the forth year running, we reached the First Round Proper in a campaign that really turned heads. A local derby was on the cards in the fourth qualifying round as we were drawn away to then high-flying Weymouth. Almost 6,000 were in attendance as a 2-2 draw brought them back over the ridge, where a packed out Avenue watched "the lights" defeat "the terras" 2-1.

The prize was the visit of the then famous amateur team and indeed holders of the FA Amateur Cup, Wycombe Wanderers. The Magpies ran out 3-2 winners in a pulsating game. An away trip to Plymouth Argyle would await, but again, we'd stumble to a heavy defeat to league opposition, this time 5-2.

Then in '59, we were at it again. A Dinky Curtis goal against Weymouth gave us another derby cup victory, and put us in the First Round hat, where we were pulled out away to Port Vale. Bill Gillett equalised, but we slipped to a narrow 2-1 defeat.

Below:  (top) York City's Norman Wilkinson scores past Dorchester 'keeper Ken Bird in front of a 5,750 crowd at the old Avenue Ground. The railway embankment is visable in the background above the crowd. (bottom) Ken Bird collects the ball at Loftus Road, as we play QPR in the FA Cup. 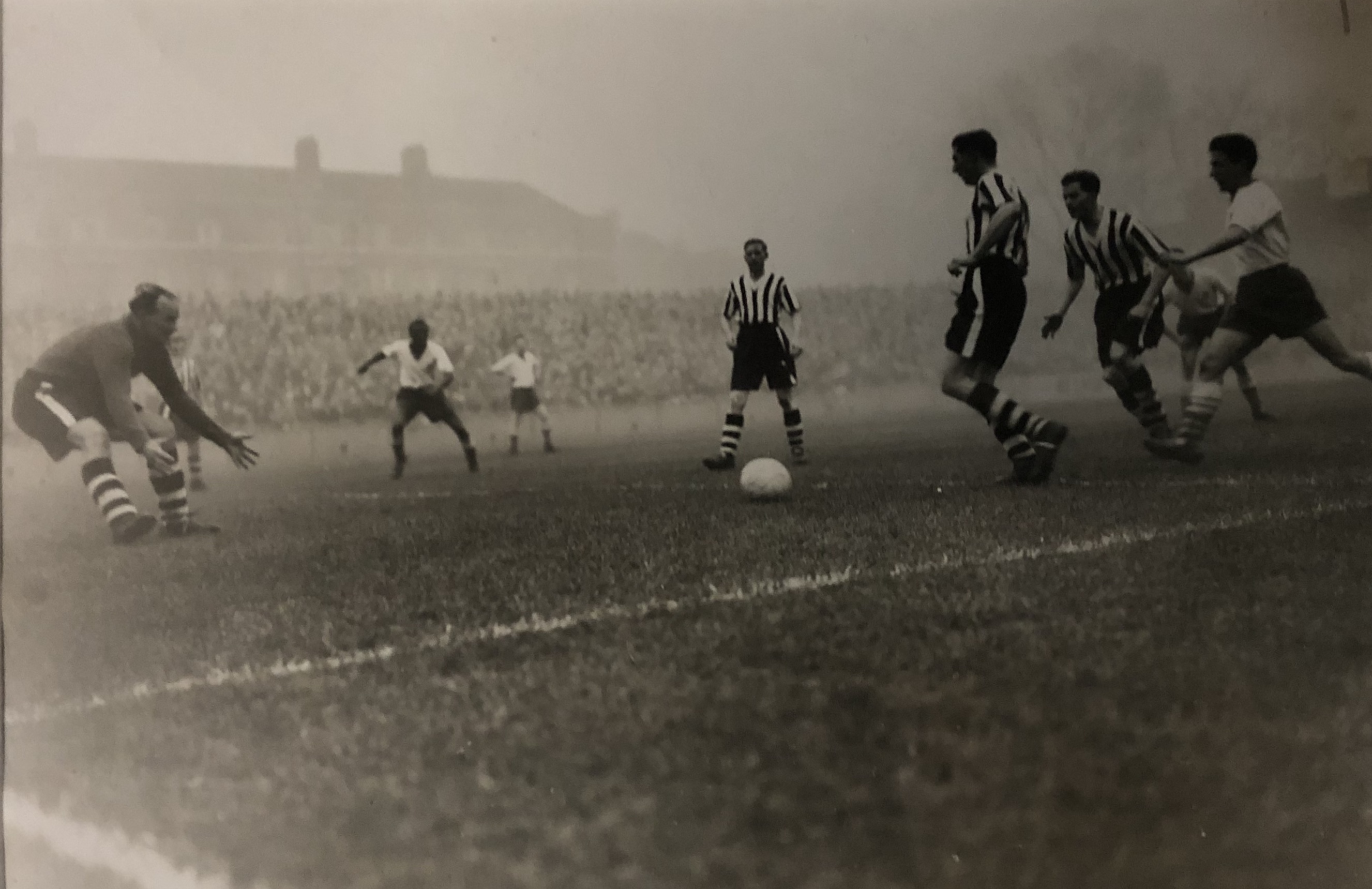 The club joined the Southern League (South) in 1972 and five years later finished runners up to Margate and gained promotion to the Premier Division.

The following season saw the Magpies curtailed by formation of The Alliance League (now The National League). Struggling in their initial season in the Premier Division (1978-79), we fell four places short of making the cut into the new league and fell back into the reformed Southern Division.

We celebrated our centenary season by winning it at the first time of asking, but with no promotion to the Alliance Premier in it's first season of existence, we were denied the chance to play at the highest level of non-league football.

The following season, the club once again tasted FA Cup glory. A replay win over Minehead saw us rewarded with an all-Dorset clash at home to AFC Bournemouth in front of a sold out Avenue. A famous Paul Thorne goal took us back to an 8,000 Dean Court, where a last gasp extra-time goal broke Magpies hearts.

A severe financial crisis hit in the mid-eighties, with relegation and near bankruptcy. However, a remarkable season in 1986/87 saw us with the league and return to the Premier Division.

Below: The Southern League winning team of 1979/80, including former Spurs and England legend Martin Chivers (top row, second left) and our one of our own, Trevor Senior, fifth left.

The move to The Avenue Stadium

Having come so close to losing the club in the late 80's, Peter Aiken and the board realised that the old Avenue Ground had begun to outlive its purpose and brokered a deal with Tesco and the landowners, the Duchy of Cornwall, to develop a new stadium for the club.

The move saw us establish ourselves in the Southern Premier in the early 90's, before Stuart Morgan took over and led the club to sixth in 1994/95 and forth in 1997/98, along with cup success including reaching the FA Cup First Round Proper once again, where we were knocked out away at Oxford United, and reaching the last sixteen of the FA Trophy. Having beaten Slough, Sutton and Salisbury, we hosted Woking at a sold-out Avenue Stadium. In an highly eventual game that will go down in club folklore, the Cards (and eventual-winners), scored in the last minute to win 3-2.

After a poor start to the 1999/2000 season, manager Stuart Morgan was relieved of his position as manager and was replaced by Mark Morris. Morris was able to steer the Club out of the relegation zone in his first season, but was unable to repeat the feat the following season, when The Magpies lost the Premier Division place that they had held for fourteen seasons. That season saw the club again reach the FA Cup First Round, where, despite taking the lead, we lost 2-1 away to high flying Wigan Athletic.

The Magpies threatened to regain their Premier Division status in their first season in the Eastern Division, but finished in third place, however they achieved their objective the following season, when after a fine campaign with only five defeats, the Club returned to the Premier Division as Champions.

Promotion to the Conference South

In the first season back in the Premier Division, the club reached the play-offs for promotion to the newly launched Conference South. Having won away at Bath City, a swan-song Matty Holmes performance inspired the stripes to a  2-0 victory over Tiverton at Exeter City's St James' Park. 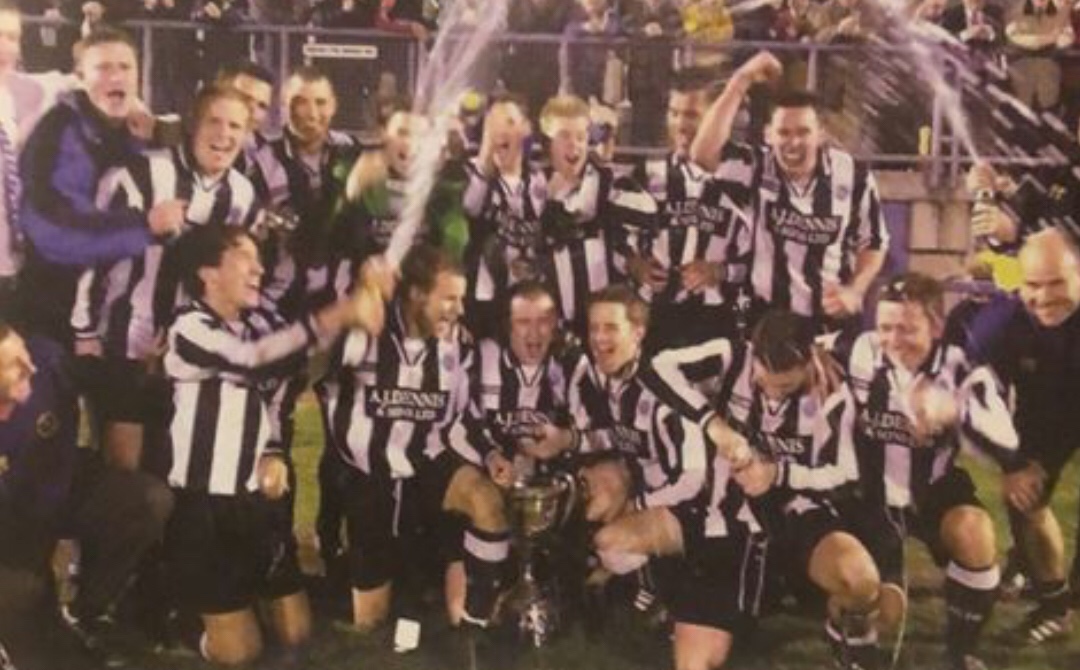