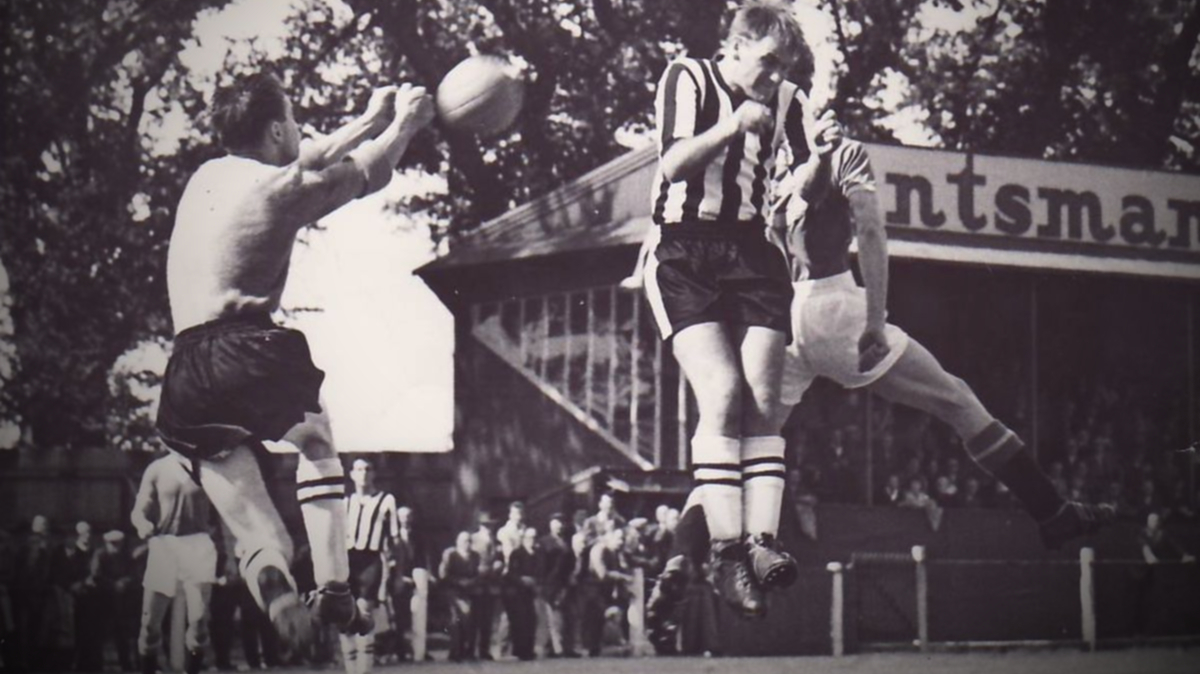 In the final segment of our 'Sponsor a Legend' campaign, we are excited to turn back the clocks and revisit the post-war period at the old Avenue Ground.

The quintessential non-league ground, with its infamous sloped pitch, quant wooden stand and raucous Bovril terrace, the Avenue Ground was our home from 1929-1990 and played host to some of the most momentous occasions in our 141-year long history. Famous FA Cup clashes against York City and AFC Bournemouth, numerous league titles and goals that can be pictured to this day.

‍
Club fan site, 'The Same Old Few', gave supporters a chance to vote for their favourite players of the new stadium era in a series of twitter polls at the beginning of lock down. The result was a 'hall of fame' of 18 players, who will over 3,000 votes between them, have now been recognised with a named seat in their honour, that was made available for sponsorship by fans.

And now, as we begin to see hope of the lifting of lockdown, we shine the light back on this momentous era in the club's history. League winning captains Ken Bird, Hedley Steele and Trevor Townsend have already been recognised, along with the man voted the club's greatest ever player, Dinky Curtis.

Each week we will focus on a new decade, giving fans the chance to  vote for players of yesteryear whose achievements will get the recognition they rightly deserve. The top three from each decade will take a place in our modern twist on a hall of fame and be recognised with a seat in their honour in the new look Main Stand.

So to kick things off this Easter Bank Holiday, we start with the 1940's, with war heroes and FA Cup winners no less.

As the world recovered from World War II and football exploded in popularity, we'd return to league football in 1947 in the then-professional Western Football League setup, ending the decade with promotion to the Western League Division 1. Key to that success were these gentlemen:

Andy Anderson: Having moved north over the ridgeway in the previous season, Anderson's 28 goals in 34 games for the Magpies would propel us to the Western League Division 1 title in 1949-50. What was even more remarkable was that he was not an ever present in the side, so his goals came at a strike rate of nearly one a game.

Bill Douglas: The first Magpies' centre forward hero in the post-war era. Douglas joined the club as they reconvened in 1947. He would score 42 goals in 68 games in his first two seasons, helping to establish the club in the Western Division 2.

Bill Rae: Bill wore the number 6 shirt and was a regular in the side from the inaugural 1947 season through to the early fifties. He was a vital part of the side that won promotion in 1949-50.

Micky Prowse: Wearing the Number 3 shirt, Prowse played nearly ever game between 1948 and 1950 and was a key member of the promotion season squad.

Tom Clark: The archetypal, dominating centre back. Clark would play for the club for almost a decade. He was a regular feature in the 1947-48  season, an ever present in the 1948-49 season, and a promotion winner in  1949-50. He would go on to be part of the side that would reach the Second round proper of the FA Cup in 1954-55, facing York City at a 5,750 sold out Avenue Ground, and would lift the Western Division One in the same season.

Tommy Rowe: An FA Cup winner with Portsmouth in 1939, Dorset-born Rowe was a distinguished war hero during WWII. He would become an ever-present in the 48-49 season and the promotion winning 49-50 season. Rowe would later managed the club in 1953 and would remain in the town, living on Manor Road until his passing.

Have your say in the poll below. This poll will close on Monday 5th April at midnight.