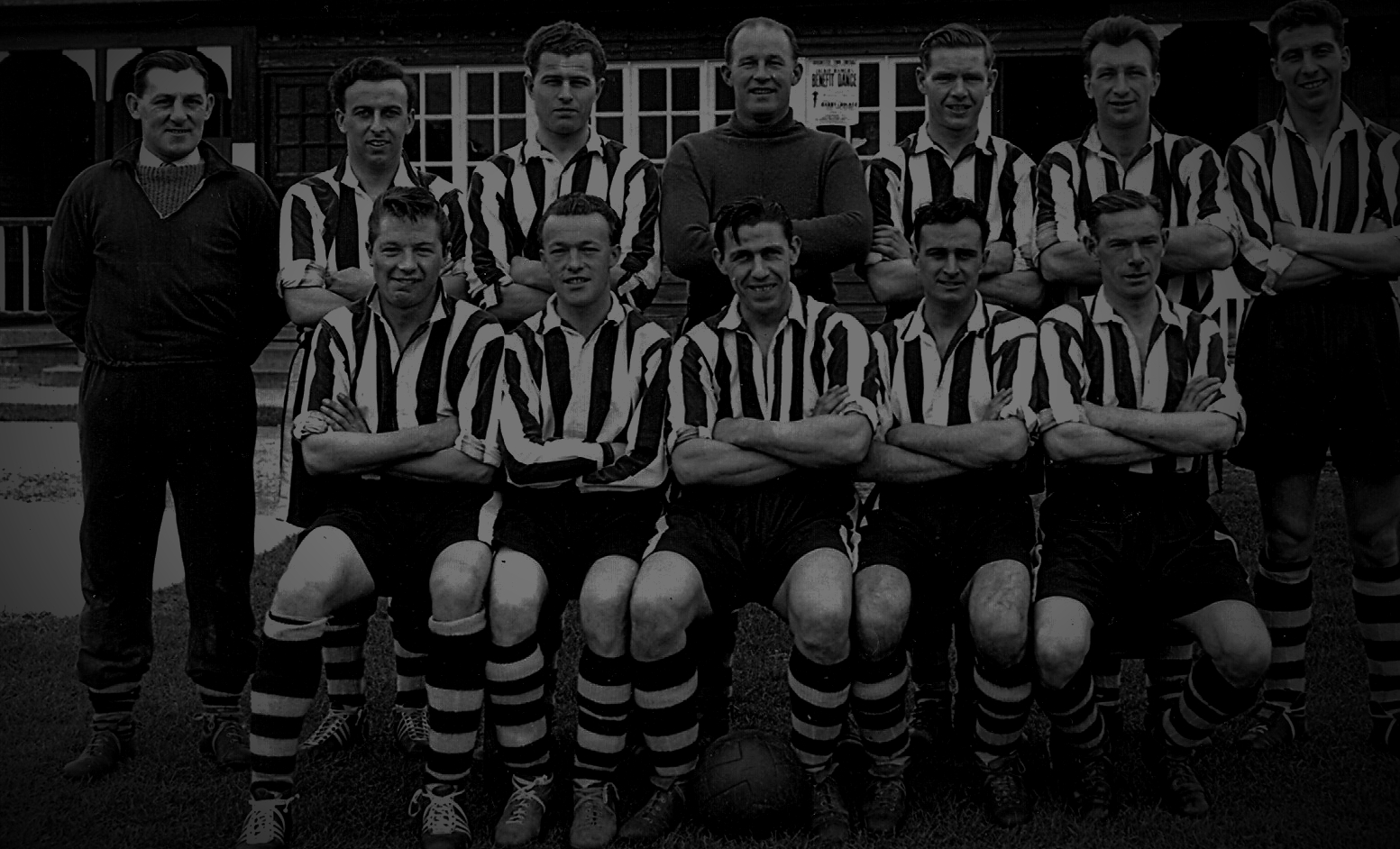 Last week's poll in the inaugural 1940-1990's Sponsor a Legend campaign, saw a great response from Magpies supporters who voted for Tommy Rowe, Tom Clark and Andy Anderson. All three players will have seats named in their honour in the newly improved main stand. The trio were vital components to the club moving into professional football in the post-war period and laid the foundations for the club to achieve notable success in the following decade.

Tommy Rowe, who ran away with the vote, is a life story worth sharing in itself. Dorset-born, he had a distinguished professional career, winning the FA Cup with Portsmouth just before the outbreak of World War II. Once war was declared, he joined the RAF, training as a bomber pilot and flew 39 successful bombing missions over Germany. A natural leader, he rose to the position of squadron leader. On his 40th bombing mission his aircraft was shot down over Germany and Tommy spent the last two years of the war as a prisoner of war. He was later awarded the Distinguished Flying Cross.

When peace returned to Europe, Tommy Rowe continued to serve with the RAF Volunteer Reserve, alongside player for the Magpies. He led the Magpies to promotion in 1949-50 and later went on to manage us in '53-54. Following his retirement from football he settled in Dorchester, and we believe, his family remain Magpie fans through the generations. If ever a man deserved to be honoured at The Avenue, Tommy Rowe is surely one.

Following the post-war rebuild, the Magpies went on to have great success in the following decade. Following a slow start to the decade, we won the Western League in 1954 and only finished outside the top three twice for the rest of the decade. But it wasn't just the league where we excelled, the fifties were all about the FA Cup.

In 1954/55 we hosted York City in the second round proper in front of a packed out 5,750 Avenue Ground, The eventual semi-finalists saw the game out 5-2, despite the Magpies scaring them early on. We reached the first round proper twice in the mid-fifties with two "plumb" away ties at Norwich City in 55/56; and at QPR in 56/57.

We reached the first round for the forth year running in 57/58. We beat then-high flying Weymouth in front of 6,000 fans in the forth qualifying round, before beating much-fancied FA Amateur Cup holders Wycombe Wanders 3-2 in the next. Plymouth Argyle in Devon awaited in the Second Round Proper, but the Second Division outfit proved too much.

We'd cap a memorable decade with another FA Cup journey to the first round proper. A Derek 'Dinky' Curtis goal once again saw us win the derby battle against Weymouth and we were rewarded with the visit of Port Vale, where we narrowly lost out 2-1.

It was a memorable decade - one that put Dorchester Town on the non-league map. The list is long and thoroughly deserved, but three of these players will be honoured with a seat in their name...

Alan Greening: Outside left signed from Oxford City in  1955 who would go on to make 198 appearances scoring 85 goals.  He played in most of the FA Cup runs and netted a twenty times in 60-61 when we hit a record setting 115 league goals.

Denis Cheney: Joining the Magpies from Aldershot, Cheney scored 104 times in 102 appearances between 1956-59 - surely a club record. Unsurprisingly, he was top league scorer in each of his three seasons at the Avenue as we twice finished 3rd in that time.

Derek Stroud: Our FA Cup hero of the fifties. Stroud was a real 'coup' when he joined the Magpies from Grimsby Town. He would go on to score 87 times in 237 appearances including scoring two vital goals against Wycombe. He netted 16 times in 60-61 in the season Dorchester scored a record 115 times. He was given a testimonial in '62 following an incredible career at the Avenue.

Freddie Ames: An outside right who was promoted with the team in 1950, Ames made 148 appearances, scoring 39 times. The first of many Dorchester sportsmen, he was the father of Ray Ames who went on to lift the league trophy in 79-80.

Ken  Symes; A full back who signed from Bournemouth in 1951. In his eight years at the Avenue he would make 222 appearances and be an ever present in our FA Cup runs.

Ron Cox: A defender who made 149 league appearances over six years at the Avenue, Cox was a mainstay of the league winning 54-55 side who also appeared in all three season's FA Cup runs in his last three seasons in the stripes.