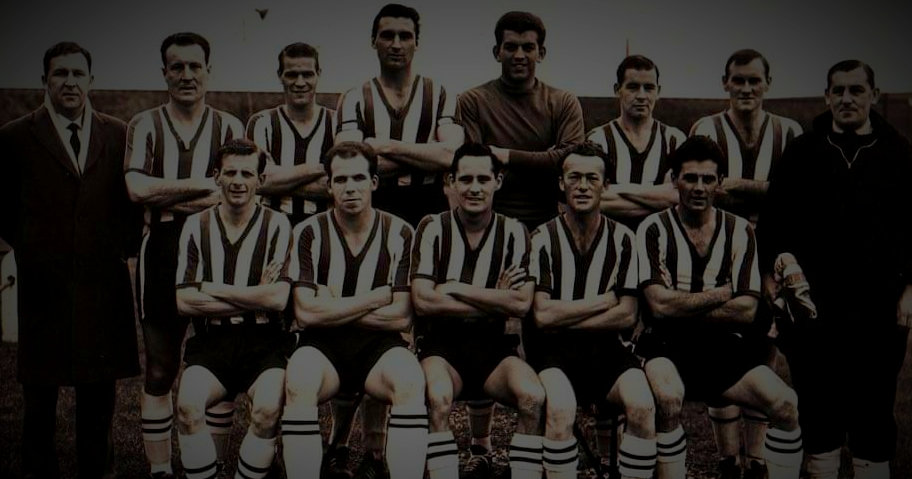 Derek Stroud, Denis Cheney and Freddie Ames are the latest Dorchester legends to be honoured with a seat in their name. Magpies fans voted the trio as the best players of the fifties. Unsurprisingly, it was Stroud, who joined the Magpies from Grimsby Town, who won with 36% of the vote. Cheney and his impressive more than a goal-a-game ratio came in a close second with 30%. Freddie Ames was the 'best of the rest' as the outside back received 13% of the vote. All three will have seats named in their honour in the main stand and are available to sponsor by clicking here.

Following a decade of FA Cup success in the fifties, the sixties were a bit leaner for the Magpies. We kicked off the decade by finishing runners-up to Salisbury in the Western League and would finish in the top six four more times that decade. We lifted the Dorset Senior Cup three times, in 1960-61, 1967-68 and 1968-69, as well as the Western League Cup in 1961-62. Key to those cup victories were a blend of homegrown talent mixed with experienced players of real calibre. We've picked out six of the best:

Bob Forrest: A former Leeds United and Notts County inside forward, who played almost 120 games for the Yorkshire club, Forrest joined the Magpies from the other side of the ridge in 1966 to become player-manager. He led the club to constant top half finishes before retiring in 1970.

Don Groves: Dorset born centre half, Groves spent the entire decade at the Avenue after joining from Upwey and Broadway. He'd retire just short of his testimonial year, having made 265 appearances in the black and white stripes.

Don Roper: A former Southampton and Arsenal inside forward, two-footed Roper was something of a Highbury legend. He signed for the Gunners in a deal estimated to be worth £24,000 and went on to score twenty times in his debut season for the Gunners as they were crowned English champions. He'd win a further Division One title and play in the FA Cup Final in '52 in a Highbury career that saw him play near-300 games for the Arsenal. He'd move back to Southampton for a couple of seasons, before joining us via a single season with Weymouth. In a three year career with the Magpies, Roper would play over a hundred games scoring over thirty goals.

Dave Neal: Dorchester born Neal was an outstanding goalkeeper who spent almost the entire decade with his boyhood club. He made almost 250 appearances for the Magpies before seeing out his career with Bridport.

Graham Fuge: Another homegrown talent, Dorchester-born Fuge made his debut for the first team in 1956 and would play for his home town until 1969. In a thirteen year spell at The Avenue, he'd make over 300 appearances, scoring 178 goals, including 20 of the 115 goals we'd scored in the record breaking 60-61 season. Upon leaving the Avenue, Fuge would stay local, leading the line for Dorchester YMCA.

Jackie Henderson: One of the most accomplished players to have ever played for the Magpies, Scottish international Henderson had a glittering professional career. He begun his career with Portsmouth, going on to make over 200 appearances for Pompey, before moving to Wolverhampton Wanderers where he'd win the First Division. He'd stay there for less than a year, as a move to Arsenal materialised. He'd play over 100 games for the Gunners, scoring 1-in-3 games. Fulham paid £14,000 to take him to South London, where Henderson would lead them to the FA Cup Semi-Final in 1962. A broken led the following season saw Henderson retire from professional football, and he moved to Dorset, helping Poole Town to promotion to the Southern League, before spending three seasons at The Avenue where he'd score 44 goals in 134 appearances.